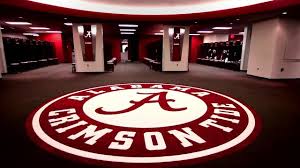 Here in sweet home Alabama it is a Big football day for the Crimson Tide!

We play LSU and I have to say to my LSU friends, I love you but we need to understand it’s a game and I will be hollering Roll Tide no matter what the outcome of the game is all day and night. It is the way it is.

Maybe because when I was younger I went to an Alabama vs LSU game with my sister, her dad and brother. Alabama was losing badly and when we scored 3 points I jumped up screaming and hollering, happy my team had scored at all, when this absolutely ass of a fan next to me screamed for me to sit down and shut up. Shocked I sat down but still clapped, looking sideways to my left at this jerk of a human. It was a football game. I was used to the rivalry between Alabama and Auburn. I enjoyed it and whomever won I’ve always enjoyed the games. I know that we were playing poorly but come on, I wasn’t up in his face like he was mine taunting me about how crappy my team was. (Actually it was pretty raunchy and I was about 14 so it was kind of shocking to me but I played it cool.) It seems I wasn’t the only one watching him. Both LSU and Bama fans were watching as were my sister’s father, brother and security.

When we scored again getting us a tiny bit closer to their lead I lept up screaming with glee! That’s when the shit got real. Mr. LSU Jerk of the Year jumped up and grabbed my arm and screamed, “I told you to sit down and shut up!” He also included a few more adjective I won’t subject y’all to but you get the drift. The next thing I knew I felt my body being lifted and pulled to the right, saw people approaching from all sides, and then saw him lift his arm to hit someone, but he quickly went down! He was escorted from the game by officers. I was a bit shaken up but continued to scream for my team even though we lost that game.

The ride home was surreal. It seems Big J, sister’s “dad” and Little J, her brother, had moved her and got to me in seconds and were going for the jerk. Apparently, unbeknownst to them, security and several fans, of both sides, were waiting for him to blow and jumped into action when he grabbed me and started screaming at me. I will forever be grateful to all of those folks who jumped to my rescue.

I continue to look sideways at crazy football fans after that experience. Being from the south, I understand how important football is. How being loyal and believing in a team can feel. You share your wins and losses and always remain true. Well most people! I understand the rivalry and the thrill of it. The good natured teasing and hopefully claiming the champion title. I GET IT! I do. 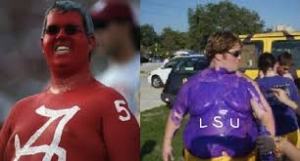 But sometimes folks take it way too far. They get mean. They really hate people for their love for another team and their loyalty saying they can’t understand why they love that team so much when theirs is so much better. I have to wonder if they don’t look at themselves for that answer and reverse the question! Then sometimes that take it way to far, like grabbing a kid because they don’t want the other team to score at all even though their team is beating the crap out of them. They don’t want Anyone on that team to have any happiness and joy so they try their damnedest to control it.

Guess what? It never works out well.

I did learn there are some great LSU fans out there. Quality folks who I have met, befriended and enjoy the usual rival during football time. No matter who wins, we always have our friendship.

I guess I am trying to say no matter who your team is and who you are playing or don’t like, remember there are real people on both sides that care not only about the game, but other people as well. So when you say you hate *insert team* you are saying that you hate everyone that stands with them. Then you are ostracizing an entire group of people over a football game. You could be missing out on potential friends, spouse or employers. Now due to your hate you could possible damage happiness in your own life. Not such a good idea and definitely not healthy!

So everyone let’s try to remember we are all human and this is a game. 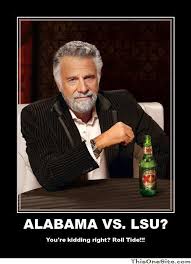 That being said ROLL TIDE BABY! Let’s bring it one! No matter what let’s have Fun! 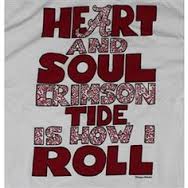