The other night I was taking pictures of the moon.

My little smarter-than-me phone doesn’t have the high quality of a “real” camera but I was trying.

I got some decent shots but I realized I was trying to capture something I could not get on film.

If I was being honest with myself I was trying to capture not only images my phone camera couldn’t capture, but also of the way the night felt. Maybe even how I felt.

I was able to capture an image of something I cannot explain.

It was not visible to the naked eye, but as soon as I trained my camera on the area that I wanted it would appear. 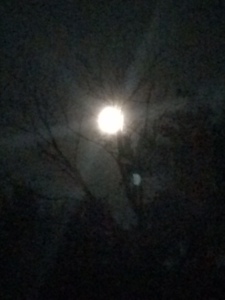 Trust me I took several photos just to see if it was on my lens, I cleaned it, it was not.

I do not know if what I saw was a “trick of the light” a “reflection of the moon” or “something else” but I know I was the only human on the porch and I did not feel alone.

I felt like someone was there with me but it was comforting. 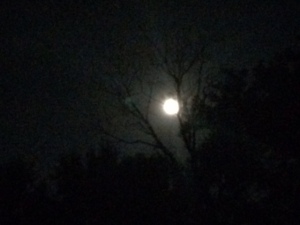 The big moon in the sky with light so bright it felt like everyone, everything, every being was exposed and in harmony.

I wanted to run in the field light up so bright it felt magical.

As it was I danced in the light to tunes in my head.

Knowing I was not alone and knowing how peaceful I felt.

Yes, the man in the moon is smiling, smiling on a girl in the world.